I was invited as media to cover this press event. All opinions are my own.

Have you seen the new hit show on ABC called Black-ish? If you have then you know how fun it is, and if you haven’t you’re missing out on a great show! A few weeks ago we were in Los Angeles for a variety of premieres and TV shows and that included a special interview with star of Black-ish, Tracee Ellis Ross as well as a set tour of this fun show led by no one other than Tracee Ellis Ross herself. I am excited to share some awesome pictures and facts about this TV show set with you. 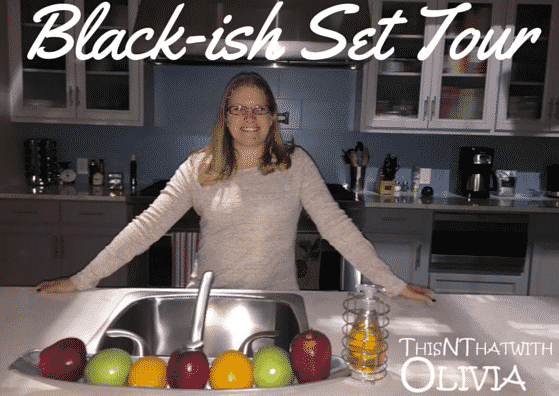 I have never been on the set of a TV show and honestly never thought that I would have the opportunity. When I found out that we were touring this set, I decided to watch a few episodes so that I would be prepared. That’s when I got hooked – this show is hilarious!! When we arrived at the lot where Black-ish is filmed, we were warmly greeted by Tracee outside and then taken on a tour of the set led by her.

While on set, I tried to remember a few episodes that I had seen so that I can be like – wow, this is where they filmed that, and this is how this looks when filming. It was so neat to put myself in that spot and think about the show. Tracee shared some fun moments that they had on the set and showed us some fun hiding places for her scripts. 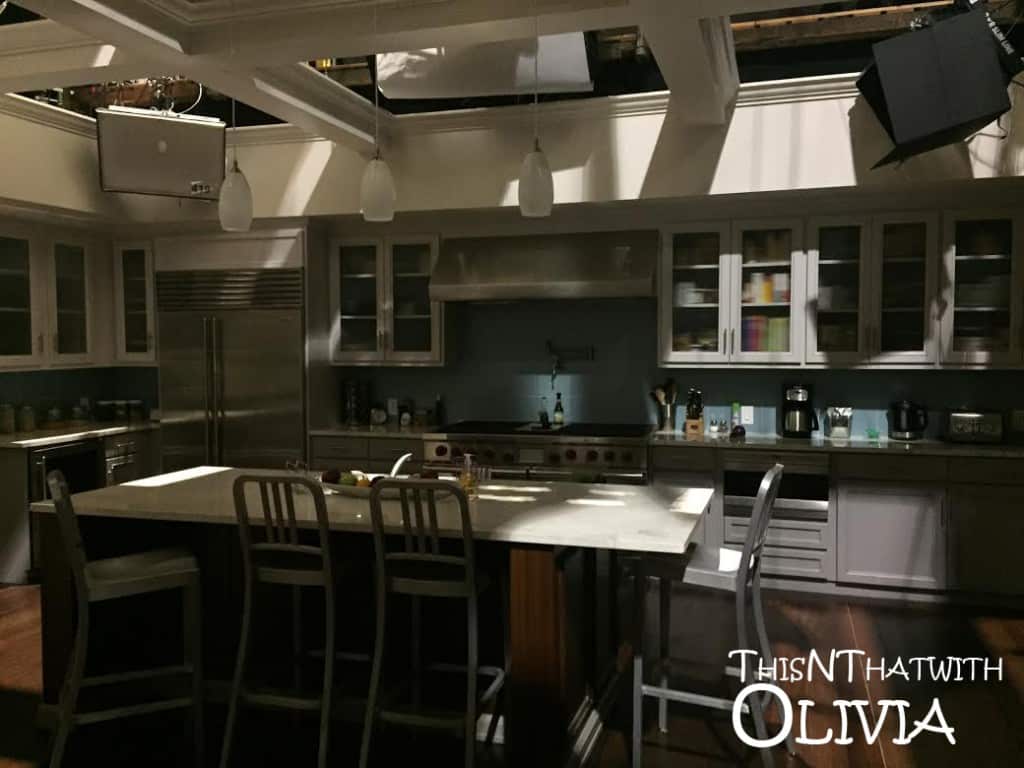 Check out that kitchen! It was humongous and so welcoming. Tracee showed us that there are real M&Ms in the jar on the counter and said that she sometimes snacks on them in between scene filming. She also showed us that she hides scripts in the drawers around the kitchen so that when they are filming she has easy access to her lines if she stumbles. I thought that was genius! It is insane to think that there are that many lines to memorize. I always had a tough time memorizing things in school, haha!! 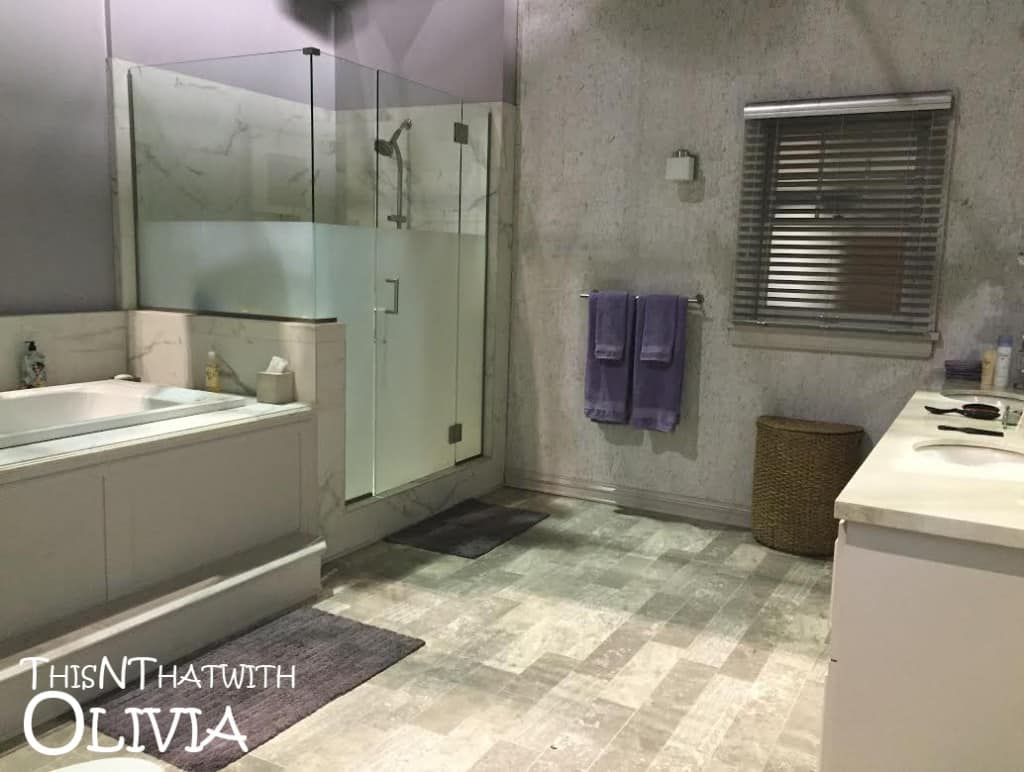 Check out this master bathroom. No, there isn’t a ceiling (the entire set is that way) but it is humongous and I want it in my house. You know, I don’t even care that it doesn’t have a ceiling. 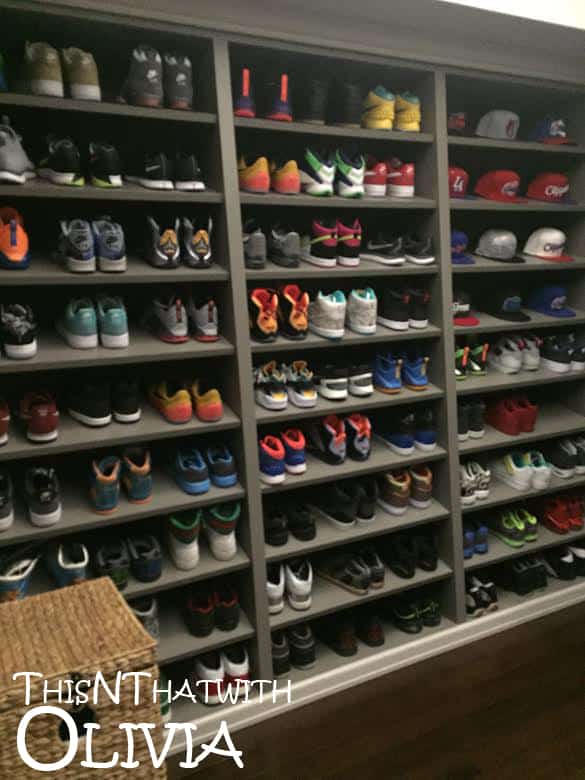 My husband thought I had a lot of shoes….. ummmm no way! Check out this wall of shoes. Andre has a nice array of shoes and clothes in this closet. It is so funny to see how much of the closet is his on the show!!

I loved seeing these types of things around the set of Black-ish! It really does look so much like a home on the set of these TV Shows. It is amazing to see the level of detail used in the decor and personal touches for the home set. 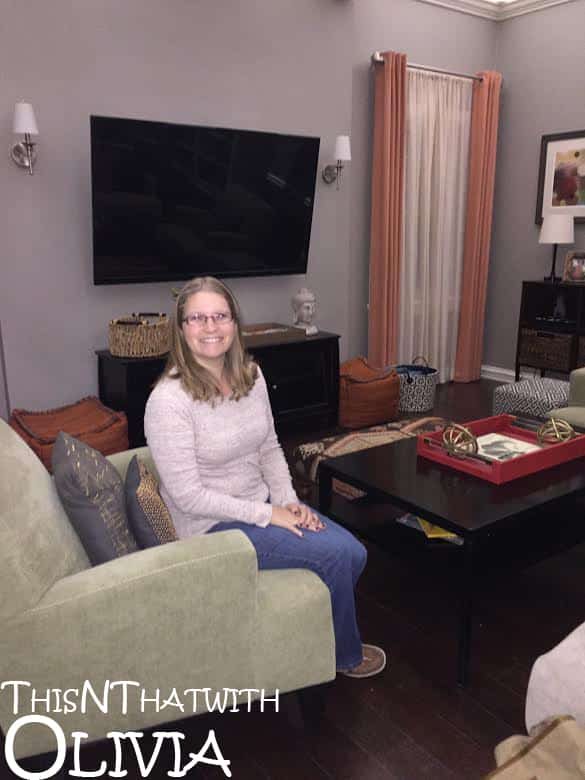 While we were there, I took the opportunity to sit down and snap a picture in the living room!! How fun that was to think of all of the people that sat there and also how many scenes they shot there. 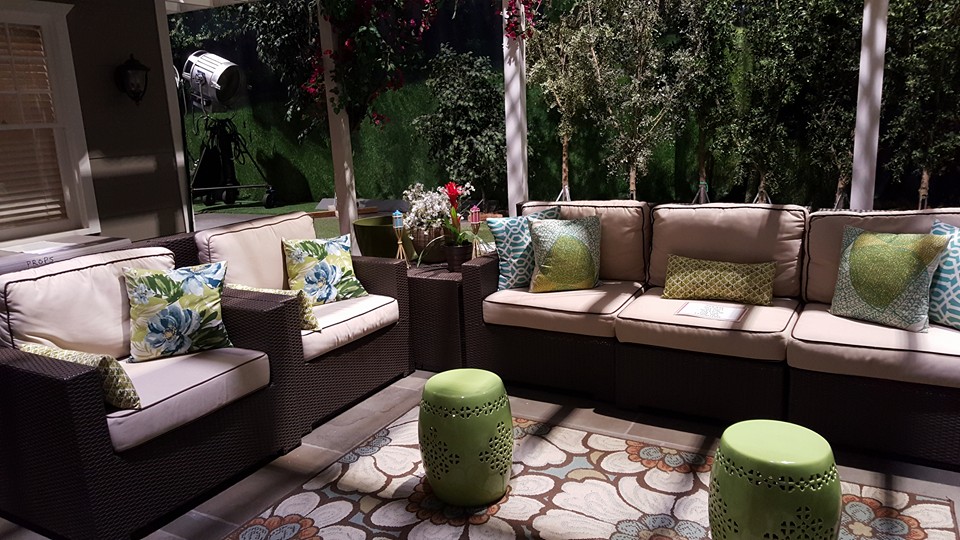 The patio of the set was pretty awesome. I wanted to take the furniture home and put it in my back yard- beautiful. It was so fun to see the set and think about how they film scenes on the patio.

I could go on for days about the awesome experience we had on the set. Tracee guided us and showed us some awesome things that we may not see with a blind eye. We also had the opportunity to be ON the set of a hit TV show- how cool is that. Black-ish airs (WEDNESDAY) nights on ABC at 9:30pm/8:30pm Central. Here are some details about the upcoming episode- be sure to tune in tonight!!

POPS AND RUBY TRY TO SHOW THE KIDS THE TRUE MEANING OF CHRISTMAS BY PARING DOWN GIFTS AND SPENDING MORE TIME TOGETHER, AND DAPHNE LIDO INVITES HERSELF OVER TO CELEBRATE WITH THE JOHNSONS, ON ABC’S “black-ish”

“Stuff” – Dre thinks Christmas has become commercialized and is all about “stuff,” and no one loves “stuff” more than his kids. Pops and Ruby think they have forgotten the true meaning of Christmas and come up with a new plan to pare down gifts and spend more time together. The kids don’t handle the news well and hope that if they put on their best behavior Dre and Bow will cave in. Meanwhile, Daphne Lido (played by Wanda Sykes), who is single for her first holiday alone, invites herself to the Johnson family home to celebrate with them, on “black-ish,” WEDNESDAY, DECEMBER 9 (9:31-10:00 p.m., ET) on the ABC Television Network. 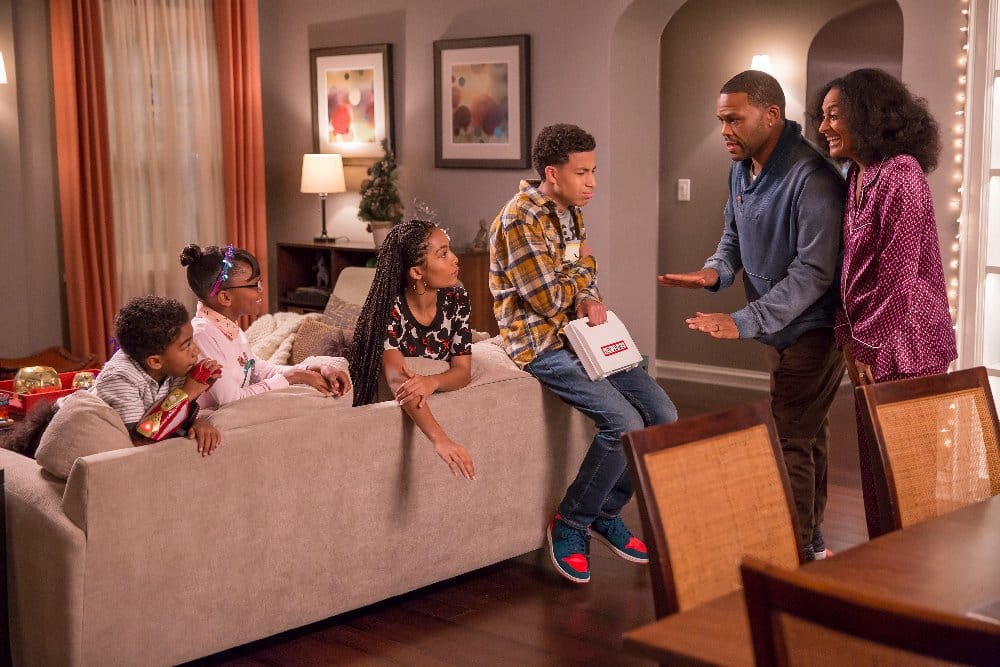 “Stuff” was written by Corey Nickerson and directed by Ken Whittingham. 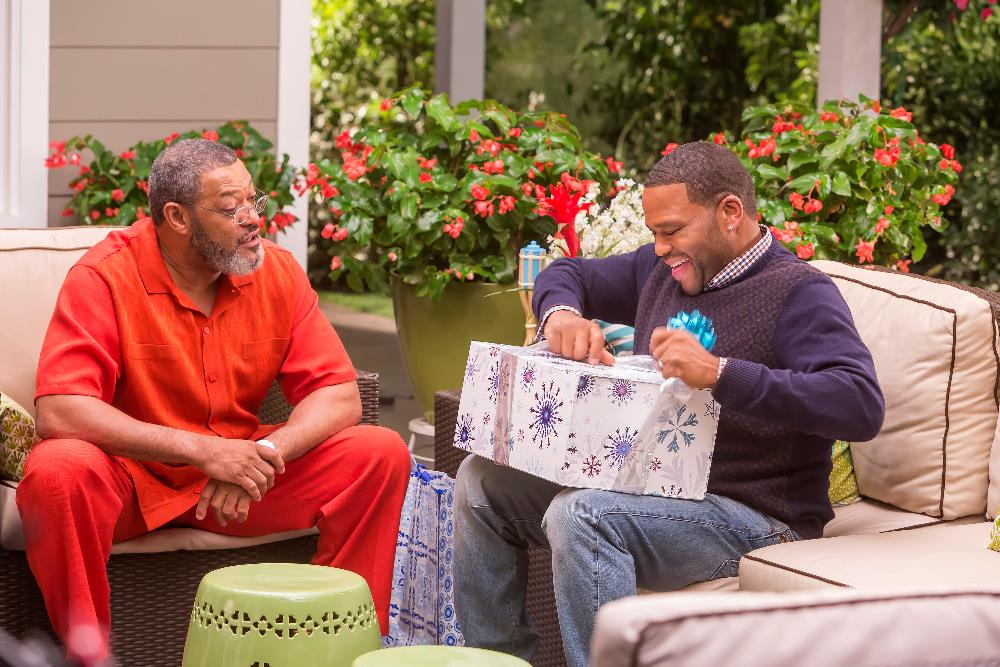 “black-ish” was created by Kenya Barris and is executive-produced by Barris, Anthony Anderson, Laurence Fishburne, Helen Sugland and E. Brian Dobbins. The series is produced by ABC Studios. 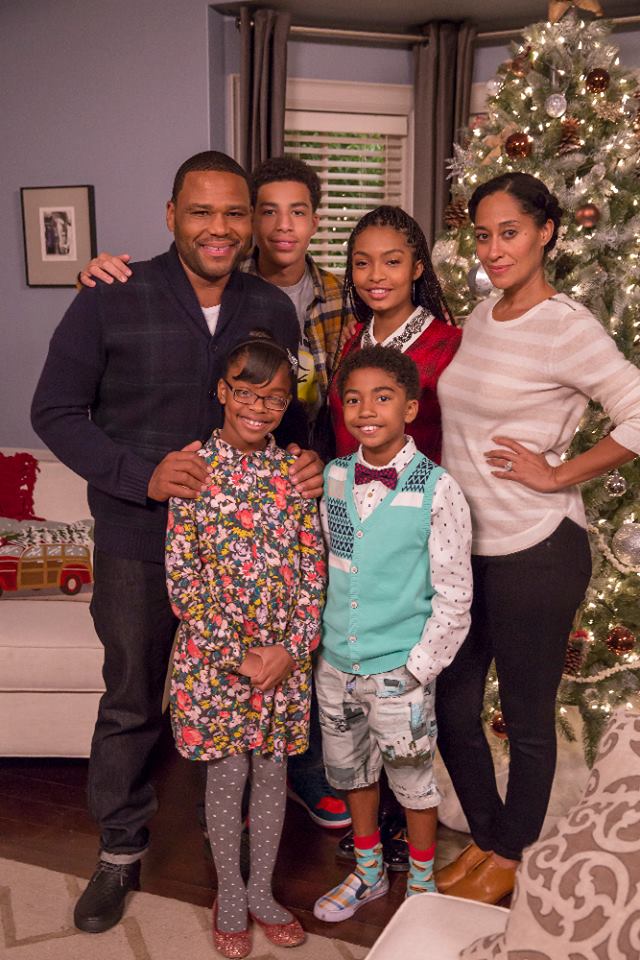 Thank you So much for this post, this is one of my absolute favorite shows. Where is the set in LA? It's so gorgeous out there. Thanks again the awesome write up. :)

You're SO welcome! The set is in LA in the studio where the show is hosted (not sure of the exact name). :-D 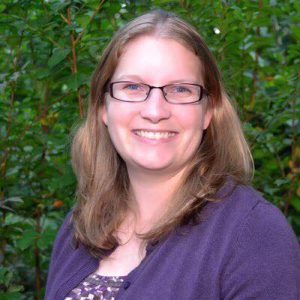