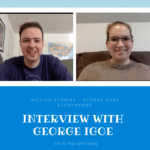 George Goes Everywhere is a new series on Million Stories that features George Igoe. George travels to different cities in the USA and spends the day doing activities and eating food for under $100 total.

Traveling is not the same as it was before the Coronavirus pandemic. I am a Mom to 2 kiddos living on the East Coast and we love to take day trips and have these experiences with our little family. However, with the pandemic, it isn’t as easy to travel. As we are (hopefully) starting to see the country open up more, and travel is something many people are looking to do, this series is perfectly timed.

This series has short episodes (about 6 minutes each) where George explores cities across the U.S. with just 100 bucks in his pocket! George shares clever travel tips & tricks that won’t break the bank account or max out the credit card.

A New Jersey native, Igoe has worked for shows such as “Family Guy,” “The Cleveland Show,” and was a writer on  CBS’ “Mike & Molly.” No stranger to the world of affordable travel, he developed “Rich Travel / Poor Travel,” a show where he traveled first class with frequent flyer miles, then explored the destination city on a micro-budget.

I was given the opportunity to sit down with George Igoe on Zoom and chat about this new series and his love for travel. After seeing the Boston and New York episodes, I was super excited to see the other ones.

Living on the East Coast, I’ve been to both Boston and New York but the activities and foods that George experienced in these two areas were things I’ve never done before, which is awesome!

Can you tell us a little about George Goes Everywhere and your inspiration for this series?

George – “George Goes Everywhere is a show where we explore a city and see as much of it as we can, all for under $100. It’s a show on MillionStories.com. Million Stories is about teaching financial literacy and showing how to have those conversations about money and to take control of their financial future. The inspiration for the show comes from my personal life. I’ve always had travel ambitions but not the bank roll to support it. My background is in TV and working TV writer’s rooms for many years. It was time to combine those two aspects of my life and make a show about it.

What do you hope viewers get out of this show?

George – “I hope they see that you don’t need to break the bank to have fun! Sometimes embrace more silly things, you know. Taking break dancing lessons is a little more silly, and something that not many people would think to do. Opening yourself up to more silly things will open you up to more fun without breaking the bank!”

Out of the cities you visited, do you have a favorite?

George – “I like them all, I like going everywhere! I’m from the NY area so I am biased towards NY. Chicago and Milwaukee were both fun! I love Chicago, and I had never been to Milwaukee before. Milwaukee surprised me with all the fun stuff and how nice the people are. The midwest charm is a thing and a real pleasure to be there!”

Do you have a favorite activity or food that you enjoyed in New York and Boston?

George – “In New York and Boston, I think the food! The “Nonnas of the World” in Staten Island, I think that’s such an amazing idea and I don’t know why that’s not more common. I liked it not just because the food was great, but there was a certain roulette aspect to it. You didn’t know what you were going into. The day I was there, it was a Peruvian woman, but you don’t know what you’re going to get – it could be Indian, Puerto Rico, etc. She even invited me back into the kitchen!”

Do you tend to gravitate towards more of a certain category -food, experience, culture, etc.?

George – “I think I try to cast a wide net. I try to hit a variety of things because I think when doing a show like this I want every viewer to be able to connect to one thing in particular. What I found in the Boston episode is that people are going wild about the Spite Houses! Everyone is like, that is so crazy! I try to hit something and make sure everyone has something they can see themselves doing.”

Did you get to choose the locations you visited?

George – “That was picked kind of by the people at Million Stories. They just gave me the list and adjusted a bit. I added New Orleans in there. We stuck with the eastern half of the country for this part. I was never concerned about the areas we went, because you can have fun anywhere. I kind of want to go everywhere.”

George – “I’m not a shy eater, I’m up for trying basically anything. Sometimes it is fun to go a little further out if your comfort zone. In Savannah, I ate something called “Bunny Chow” which is a South African restaurant and its a loaf of bread that has been hollowed out and filled with a type of chili! In Nashville, I ate Nashville Hot Chicken and I’m not a hot/spicy food person. I paid the price for it but it was worth the experience.”

How was the show filmed? Was it a one man show?

George – “Primarily me! We did have a field producer with me and she would get releases and paperwork. She did sometimes become the cameraman for me like when I had break dancing lessons! The aesthetic I am going for was a selfie cam showing that it is a one man show! I shoot it, edit it and kind of going for that one person with a camera in a location! I didn’t want it to be so “produced” and with a ton of voiceovers and all. I wanted it to be real. More of a blog style, a little rough around the edges.”

It was an absolute pleasure to chat with George and to watch this series! He has energy that is fun, unique and perfect for the show. As we come out of the pandemic and travel starts to reopen, I hope that you and your families will check out his show and find fun things to do!!

About Million Stories & The Singleton Foundation

In addition to “George Goes Everywhere,” the free streaming platform Million Stories offers a diverse slate of series centering around financial literacy, including “Adulting with Richard Sherman,”  where the San Francisco 49er’s captain coaches young people through ‘adult’ financial decisions. From paying off student loans, creating a budget, or starting an emergency fund, Sherman breaks down his tips and strategies for financial success. “Faceplant” shares the personal stories from people who discover the value of failure in pursuit of their dreams. A variety of people are profiled including YouTube personality GloZell, Academy Award Winner Peter Ramsey (Spider-Man: Into the Spider-Verse) and two-time Olympic gymnast Danell Leyva.

The Singleton Foundation, which powers Million Stories, is a non-profit organization that has launched the digital media platform dedicated to educating & encouraging Millennials and Gen Z with regard to financial literacy and entrepreneurship through bingeable short-form video content. Million Stories harnesses the power of entertainment and storytelling to make money matters easy, inspiring, and manageable.  The channel aims to provide millennials the financial skills and entrepreneurial mindset to face finance challenges through free extensive, easy-to-use learning resources.

Where to Watch George Goes Everywhere

You can catch this series on the official website HERE.

Be sure to follow Million Stories on Social Media too:

← Previous
All You Should Know About Opting for the Right Denim