I am so excited to share with you that Walt Disney Animation Studios (WDAS) and Pixar Animation Studios are teaming up this holiday season when WDAS’ new featurette OLAF’S FROZEN ADVENTURE opens in front of Disney•Pixar’s original feature film COCO on Nov. 22nd!

Here is the new trailer for OLAF’S FROZEN ADVENTURE:

Featuring four new original songs, the 21-minute featurette welcomes the original cast and characters back to the big screen, including Olaf (voice of Josh Gad), who is on a mission to harness the best holiday traditions for Anna (voice of Kristen Bell), Elsa (voice of Idina Menzel) and Kristoff (voice of Jonathan Groff). Directed by Emmy®-winning filmmakers Kevin Deters and Stevie Wermers-Skelton (“Prep & Landing”), produced by Oscar® winner Roy Conli (“Big Hero 6”), with original songs by Elyssa Samsel and Kate Anderson (“Between the Lines”), OLAF’S FROZEN ADVENTURE will be in theaters for a limited time beginning Nov. 22.

“I’m thrilled that Disney Animation’s featurette OLAF’S FROZEN ADVENTURE will be coming to theaters in November with Pixar’s COCO, said John Lasseter, chief creative officer, Walt Disney and Pixar Animation Studios. “It’s a perfect pairing – they’re both beautiful, heartfelt films about families and how people carry traditions forward. I can’t wait for audiences to get to see both of these terrific projects together on the big screen.”

“Stevie and I were deeply honored to be entrusted by John [Lasseter] to create an all-new story with these characters we love,” said Deters. “We’re thrilled to have our film play on the big screen with COCO during the holidays.”

“We loved getting in the recording booth with these incredible actors who know their characters inside and out,” added Wermers-Skelton. “We can’t wait for audiences to see the featurette, enjoy their performances, and hear the incredible new songs written by Elyssa and Kate.” 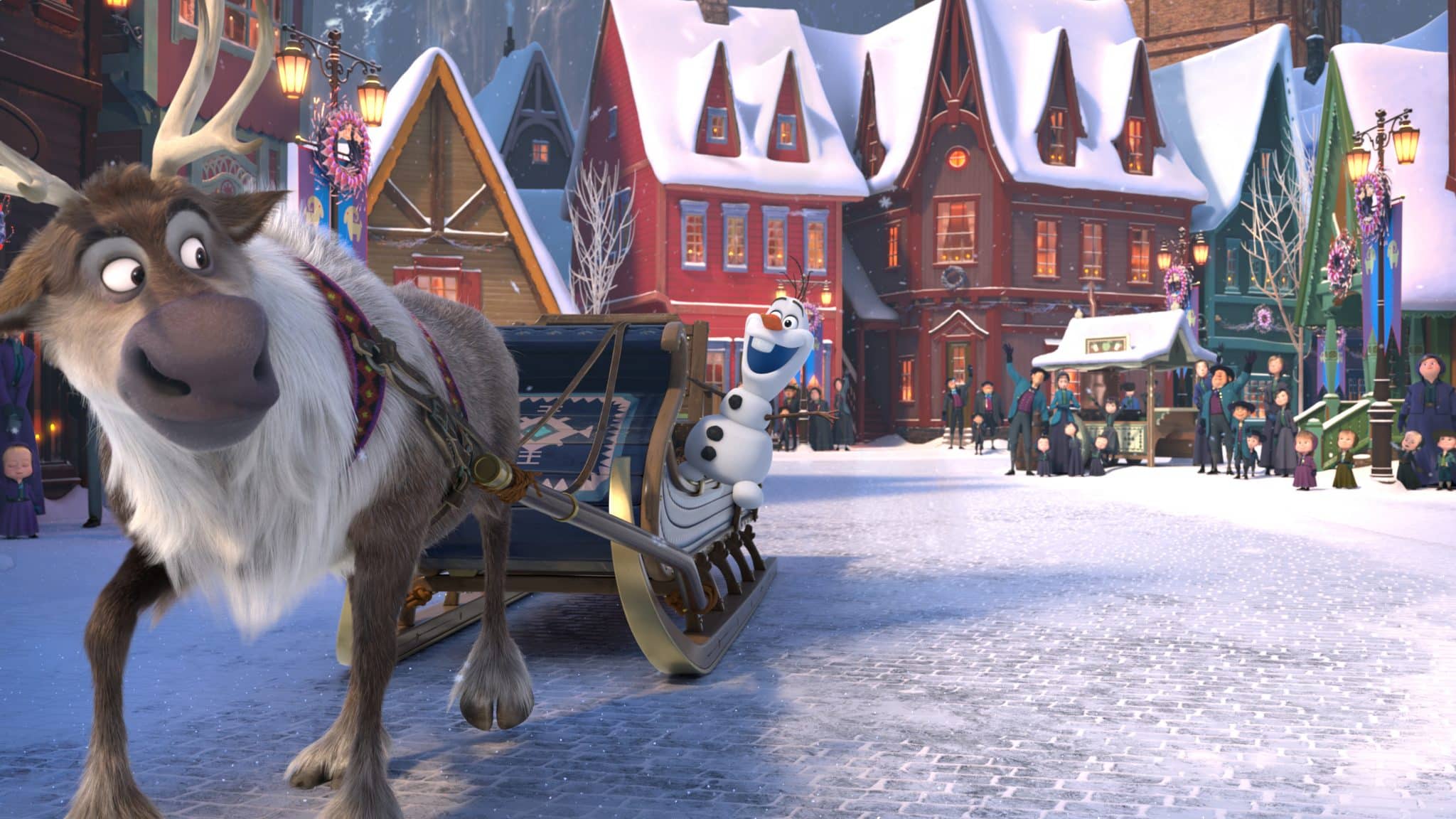 Olaf (voice of Josh Gad) teams up with Sven on a merry mission in Walt Disney Animation Studios’ 21-minute featurette “Olaf’s Frozen Adventure.” It’s the first holiday season since the gates reopened and Anna (voice of Kristen Bell) and Elsa (voice of Idina Menzel) host a celebration for all of Arendelle. When the townspeople unexpectedly leave early to enjoy their individual holiday customs, the sisters realize they have no family traditions of their own. So, Olaf sets out to comb the kingdom to bring home the best traditions and save this first Christmas for his friends. Directed by Emmy®-winning filmmakers Kevin Deters and Stevie Wermers-Skelton (“Prep & Landing”), produced by Oscar® winner Roy Conli (“Big Hero 6”), and featuring a screenplay by Jac Schaeffer and four original songs by Elyssa Samsel and Kate Anderson, “Olaf’s Frozen Adventure” opens in front of Disney•Pixar’s original feature “Coco” in U.S. theaters on Nov. 22, 2017.

Despite his family’s baffling generations-old ban on music, Miguel (voice of newcomer Anthony Gonzalez) dreams of becoming an accomplished musician like his idol, Ernesto de la Cruz (voice of Benjamin Bratt). Desperate to prove his talent, Miguel finds himself magically transported to the stunning and colorful Land of the Dead following a mysterious chain of events. Along the way, he meets charming trickster Hector (voice of Gael García Bernal), and together, they set off on an extraordinary journey to unlock the real story behind Miguel’s family history. Directed by Lee Unkrich (“Toy Story 3”), co-directed by Adrian Molina (story artist “Monsters University”) and produced by Darla K. Anderson (“Toy Story 3”), Disney•Pixar’s “Coco” opens in U.S. theaters on Nov. 22, 2017.

Olaf is such a memorable character. It'll be nice to see him on the big screen again.